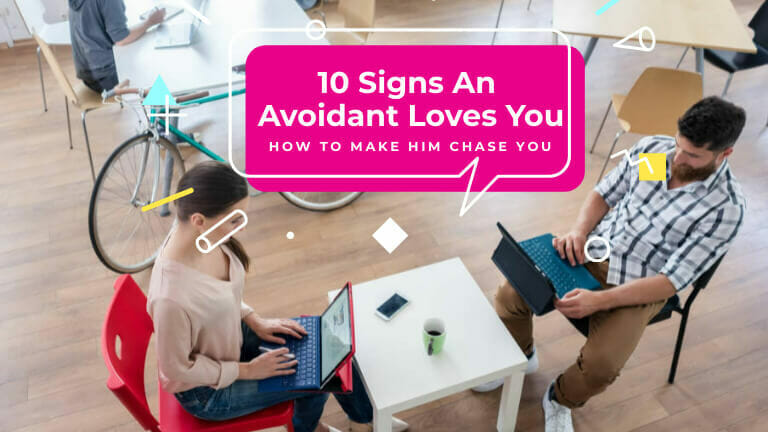 Is this something you find yourself saying—or asking—all the time?

Getting too close then falling back to stranger territory? Scratching your head when you thought if it was a yes, and now it’s a no?

I get you. The avoidant lover has a penchant for avoiding a lot of things, and that sometimes includes you.

Has Jim been erratic in his emotions lately? Switching from hot to cold and vice versa?

Is Monica playing hard-to-get? Does that mean she likes a certain guy or is just playing around?

It could be that Monica is a dismissive-avoidant so playing hard-to-get is her way of keeping a safe distance from the ones she loves.

An avoidant can appear emotionally unstable, but that doesn’t mean he doesn’t love you. That’s just his nature.

Did you know that 1.5-2.5% of people in the United States have an avoidant personality?

I know a guy named Dave who grew up with a caregiver, and so he learned to cope with separation by becoming distant and indifferent. Today, that’s how he acts when faced with a stressful situation.

Deciphering the avoidant’s actions may drive you mad—but it’s just a matter of demystifying the dude—whether he likes you, loves you, or hates your guts.

It helps to recognize the clues and signs of an avoidant: distant, fearful of intimacy, suspicious, generally oblivious, and protective of their turf. Some may have their quirks—gym addicts, no-shows, or party poopers—but you get the picture that their world may revolve around a painful or traumatic childhood.

Just don’t take hard-to-get and friend-zone moves the wrong way. It’s not you. It’s just how he is.

Before you lose hope in your avoidant potentials, remember that they’re humans too and that they are capable of love. They just express it in uncanny ways.

I’ve come up with a few to quell your confusion. Here are some of the signs an avoidant loves you:

10 Signs an Avoidant Loves You

Avoidant individuals are known for hiding behind a wall of intimacy, which is why they act stoic and devoid of emotion. They think that if you take a peek into their lives, you’ll crush them in the end.

If an avoidant loves you, he’ll let a layer or two drops so that you can get a glimpse of his true self. He’ll even show you his vulnerable side and maybe share a secret.

If he confesses to murdering his neighbour though, run!

Breaking down his emotional wall is the number one sign—and he’ll do it for you, even if it will cost him sleepless nights.

Couple shirts can only relate to like-minded lovers. There are times when she says everything, and he doesn’t say anything at all.

Differences exist and need to be respected.

If he recognizes your differences in keeping up with the intimacy pace, his awareness is a sign that he is trying to cope.

His awareness itself deserves a clap. You are acknowledged in the avoidant’s universe. Now that’s a feat.

Being independent and self-sufficient has always been an avoidant Tom’s trait.

When he spotted Lydia having her own “thing” and not acting all lovey-dovey and dependent on him, he began to warm up more with her.

Seems that Tom likes the idea that Lydia keeps her personal space too, so they’re alike that way. With this newfound romance, Tom just likes being around Lydia since she has proved her stalwart character.

We can’t expect passionate text messages or calls all night long. That’s asking too much of an avoidant.

You’re even lucky if he doesn’t keep his phone on mute.

But, if he sends an occasional text, answers your call, and responds to jokes with a “haha!” then that’s a start of a “loving” relationship.

Ben may not hold your hands in public, but he shows his love up to his physical threshold.

Maybe Ben’s threshold is holding hands in a more secure location. The other day, your fingers brushed, and he did not move his hand abruptly. That must be it!

Mark usually talks in monotone or inserts negative phrases as part of his daily routine. Today, his first sentence had a slightly higher inflection, especially when he uttered my name.

Didn’t that sound delightful? That was like music in my ears.

Apart from being critical and judgmental, he listens to your needs and thoughts. He might not act immediately on your requested trip to Jamaica, but he knows.

Ten points if he gets you Jamaican food or watches “Cool Runnings” with you this weekend.

As negative as it sounds, once James rages about his stressful day in the office and how his boss Carl can be such a jerk, that’s his way of opening up to you.

Showing you his emotions (stress) means that he’s taken a layer off his avoidance shield and welcomes you into his world.

Why does he get to play hard-to-get all the time?

Try being the coy one for a change, and let him reach out to you.

If it works, well played.

He invites you to simple bonding activities. It’s not as hard-core as surfing or mountain climbing, but reading in a park looks like an ideal quiet us-time.

There’s no emotion required, but a simple activity builds trust and positivity.

He is open to the idea of individual or couple’s therapy. Plus 10 claps if the idea even comes from him!

Talking or exposing his innermost thoughts to a therapist means removing this emotional shield, and that can only mean that he loves you to brave that front.

Therapy or counselling may not be the key to a happy ending, but it’s the start of cultivating a deep(er) relationship with an avoidant.

Consider an avoidant a keeper if there’s an effort to diminish the avoidance and be present more. Don’t keep him locked up, though; that might trigger something disastrous.

Not that you’ve un-avoided his love, it’s time to spice up the romance. I’m not talking about sparks and fireworks.

Let’s tone it down to the avoidant level. Let’s see—a glint of what seems to be a smile or taking you out to the movies. Yes, that’s more like it.

Are you up for a game of romantic tag?

Take your love spree up a notch by getting him to miss and chase you. Wouldn’t it be great to be chased this time?

Sit down, grab a cookie, and learn how to make an avoidant miss you.

Making an Avoidant Miss You

An avoidant values his independence and freedom. He may find a serious relationship too suffocating.

Why don’t you be the one to take a break or a long vacation (from him)? This time, go on an extended personal adventure and have him seek you.

Find a new hobby that you love, and spend time crafting it. You can learn gardening, cooking, or speaking a new language.

If an avoidant retreats into his “world” when he feels too emotionally burdened, he resorts to family members or other activities. Now you have your own “escape world” too.

Since you’re so busy being the next Picasso, you’ve just established yourself as an independent. That means you passed his test and are now a certified “un-clingy girlfriend.”

Missing you means he’ll feel the need to be a part of your new time-consuming hobby. If he doesn’t feel like picking up a paintbrush, he’ll probably pick you up instead.

Avoidants are notorious for having addictions. They’d rather pour their heart (and soul) into video games, junk food, or gambling—but not you, sorry.

Turn that addiction around by being someone who can do something that sweeps him off his feet.

If he loves curry, cook the best curry he’s ever tasted.

Beat him in his favourite video game.

Show him a thing or two with your poker face.

Do the things he loves without going overboard. When you’re not around, he’ll surely follow you around to get that taste of his comfort zone.

How to get an avoidant to chase you? Be such a good sport—reliable and real—, and he’ll be the one to search for you.

Avoidants expect disappointments and fake promises. Shower him with authenticity, dependability, honesty—just like a good politician (minus the frills and fluff)—and he’ll be back for more.

Avoidant Jim finally tells Marga the L word. Wouldn’t that make you just want to flood him back with your emotional speeches? Please don’t.

Make him wait. Do not overwhelm.

Give a mutual response, and always respect the space. In adjusting to his intimate language, you just showed what an understanding and level-headed partner you are.

His previous partners got hysterical, and look where they are today.

Surprises and unexpected situations are at the top of the avoidant’s hate list.

Try the opposite. Plan in advance, and tell him about it.

That makes it worth the wait.

Mario is stressed out, but he keeps it bottled in his cool demeanour rather than talk to you about it. He was raised not to cry out loud since he got berated a lot as a child.

The only thing that got him to stop crying was a trip to his favourite neighbourhood pizzeria down the block.

Aside from his parents, only you are armed with this well-kept pizza secret. When he gets an anxiety attack, you know the pepperoni drill.

The next time Mario gets into a fix, he’ll associate the solution = pizza = you.

Avoidance triggers vary per person, and pizza is not the solution for all. It can be anything tangible or an act of service, like watching his favourite show or bringing home a parakeet.

Remember that everyone is unique, and some apartments don’t allow pets.

Create a safe space where he is accepted and not judged. He’ll realize that when he’s away from you, things go awry.

When he runs back to his safety blanket (that’s you), the stars align, and things fall into place.

So, are you running away from your avoidant admirer to test if he’ll miss you?

Is his empathy clearer now that it’s coupled with positive responses to simple questions?

If Alan sits one seat apart from you but two seats away from Marla, then that’s got to be a good hint.

I hope that this list has helped you uncover a budding romance with an avoidant. Otherwise, if he’s not into you, time to avoid him for good.

The love signs of an avoidant may be subdued, underwhelming, and on the dull side of the passion spectrum. They’re the opposite of the fireworks and romance overkill hyped by Hollywood.

What if the chemistry is there? What if you realize that overkill isn’t your thing too?

Well, that’s a story you’d like to tell—but mind the distance, please.

You might want to check out these special Relationship Guides to take your relationship to a new level:

Posted by Angela Jenkins
Follow:
Hi Myself Angela Jenkins. I provide relationship and dating guide on this website. I hope you will enjoy your stay here. If you want to connect with me, then go to contact page.
2 Comments 2 Comments

14 Signs He Doesn’t Want Anyone Else to Have You

Will He Come Back? 15 Signs That Your Ex Will Come Back

10 Signs Your Ex is Never Coming Back

How to Give a Hickey – The Easiest Process